T. Denny Sanford is a self-made businessman and philanthropist who is dedicated to supporting and creating innovative solutions that address some of our 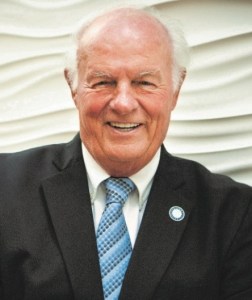 society’s greatest challenges. To date, he has committed approximately $2 billion to causes aimed at transforming the lives of others.

The impact of Mr. Sanford’s philanthropy has led to scientific research that saves lives and provides students of all ages with access to educational opportunities. Through his partnership with the private nonprofit National University/National University System, he is impacting more than 9 million PreK-12 children through the Sanford Harmony and Sanford Inspire programs, supporting nonprofit fundraising efforts through the nationwide expansion of the Sanford Institute of Philanthropy, and is the namesake of the Sanford College of Education.

Originally from St. Paul, Minnesota, Mr. Sanford amassed his fortune from humble beginnings. He credits his work ethic to his early start at the age of eight helping stock shelves at his father’s garment business after school and on weekends. He received a Bachelor of Arts in psychology from the University of Minnesota, and went on to start his first company, Contech. In 1986, he purchased a bank in Sioux Falls, South Dakota, renamed it and expanded it to become First Premier Bank, and then added a credit card company, Premier Bankcard. The success of these two companies has helped the economy and created more than 3,000 jobs within the state of South Dakota.

Mr. Sanford – whose mother passed away from breast cancer when he was four, followed by his father who passed away when Mr. Sanford was 20 –  began his philanthropic giving in the late 1990s, initially focusing on causes related to children and youth, health, and scientific research, before expanding his interests to education.

In December 2013, Mr. Sanford provided an inaugural gift to the San Diego-based nonprofit National University System, followed by donations of $28 million in 2017 and $100 million in 2018, to lead the national and global expansion of three research-based programs that strengthen the education and nonprofit communities. The Sanford Programs include:

In 2015, Mr. Sanford was honored with the naming of National University’s Sanford College of Education – which is among the Top 10 largest schools of education in the country.

Mr. Sanford’s name resides among the world’s wealthiest individuals and families on the Giving Pledge, as he has  committed to giving away the majority of his wealth during his lifetime, demonstrating his commitment to his own personal motto: “Aspire to Inspire before you Expire.”

He has been a longtime supporter of the Children’s Home Society of South Dakota, as well as the T. Denny Sanford Mayo Clinic Pediatric Center in Rochester, Minnesota; and the T. Denny Sanford Pediatric Center at Florida Hospital for Children. He also supports Dakota State University’s Beacom Institute of Technology and the University of South Dakota’s Beacom School of Business.

Mr. Sanford has donated over $500 million to the Sioux Valley Health System (now Sanford Health), enabling them to build the Sanford Children’s Hospital in Sioux Falls and pursue other major initiatives that include developing children’s clinics worldwide and whose research center focuses on finding a cure for Type 1 Diabetes. In addition, he gave Sanford Health $100 million to create the Edith Sanford Breast Center. Mr. Sanford has pledged $70 million for the Sanford Underground Research Facility at the former site of the Homestake Gold Mine in Lead, South Dakota, and $25 million to support the Build Dakota Workforce Scholarship Fund. After being honored by the Horatio Alger Association in 2016, Mr. Sanford donated $30 million to establish the Horatio Alger-Denny Sanford Scholarship Program.